With just nine days until the most high profile race in the country takes place around the streets of our capital I thought I would take a moment to look at the possibilities around the eight protagonists from LBAC.

Adam Haylock – The major concern that Adam has, is arriving too early for the race. If he is there more than half an hour before the start it is likely that he’ll peak before the gun goes through lack of expensive coffee. This will be Mr Haylock’s second marathon. He doesn’t like to talk about the first one, but if you want the details they inexplicably appeared on the Power of 10 site recently! He is hoping to just duck under that time, by a couple of hours! Much of his training has revolved around studying the location of every Starbucks on the course just to make sure he has enough energy to get the pub afterwards.

Ian Grimshaw – There is only one thing on Ian’s mind at the moment and that is a result that starts with a “2”. He’s been getting closer and closer over the last few years and has run at that pace so much in the last few months he could probably do a 6:40 mile in his sleep. This is due to a rare condition called patellacombusta where if Ian runs a mile in over 8 minutes his knees catch fire and explode.

Jon Hull – After a few years of being somewhere below his best, Jon is now challenging some of his best times from 2010 and has been very consistent in his training. He’s recently got a new job, but a slip up occurred over Easter when he was photographed training in his uniform (see picture). As a run director for Tring parkrun, he’s overly familiar with hilly off-road terrain, so the question is whether the flat streets of London are enough of a challenge. There is a guarantee though, that in true LBAC style, he will make the pub afterwards! 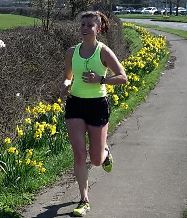 Laura Brine – She may be new to us, but she’s certainly not new to running. She is also a perfect fit for the club with purple as her favourite colour. This can be tricky as she only runs next to flowers that match her top! She ordered a purple T-shirt for the race before she joined us! Laura’s done four marathons before and each one has been quicker than the last, but she has never put in the kind of crazy miles she has for this one. In recent weeks Laura has made Forrest Gump look like a slacker as she’s built up her mileage and is now quite happy to run home from anywhere if she misses the bus! 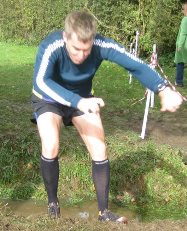 Nick Clay – Nick has been Sneaky Sneakerson this year by doing all his training in the middle of the night with just Stu’s regular Facebook updates and tweets to keep him company, and so no-one knows how well he is running. He has the best pedigree of any of the club’s runners, having done a sub 2:30 marathon in his youth a “couple” of years ago. Having entered a new age category at Christmas, he has half an eye on the club record, but don’t tell anyone as he wants to keep it quiet. What he hasn’t said is that actually the record he’s going for is the long jump! 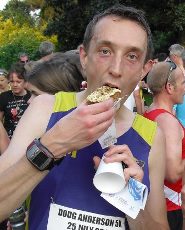 Pete Mackrell – Our esteemed club secretary has departed a little from his usual training regime of early morning runs followed by keeping Chris company in the pub over 18 pints of mild! This has resulted in him being some way off his 3 pints an hour pace! Assuming he makes it to the start line – after missing the last two London’s through injury – then surely he’ll be the first to finish. His first aim is to break the 2:40 mark that he just missed in Cologne last year. He has been roughly following the training programme  of Steve Way which is chuffing crazy stuff! 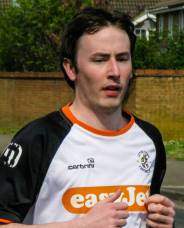 Sam Dear – Sam has been trying to get into the London marathon for many years and so getting one of the club places has helped with a long term ambition. Since getting knocked over by a car back in January 2014 when out running with some idiots he has steadily improved across all distances. He puts this down to a change of training top as he has now left his Luton Town FC top in the draw and dogs have stopped attacking him in the park. Although “Sicknote” has missed a fair bit of training this spring, he should be fine with a sensible pace in the first half.

Tom May – He’s currently on his longest injury free period since the summer of 1986 having been fully fit since last Tuesday. When I asked Tom two weeks ago if he was running, he still hadn’t decided, but then a week letter a text came through to say he’d try to get round. Tom has previous in this area though having run sub 3 marathons twice in the last three years off practically no training so don’t be surprised if you see him riding a pigeon to pub pretty early on.