Greensand 2021 and a Little History Lesson!

First, a little bit of history.

LBAC has a long history of running the Greensand Ridge. Back in 1987 we set established a record for running the length of the newly established route all the way from Gamlingay. At the bottom of this report there is an extract from a newsletter at the time, with a rare mention for Mrs Inchley (Snr)! This original relay was done in pairs, with a senior club member and a junior on every leg.

This record of just over five hours was then exchanged with a couple of other clubs for a few years, but in the meantime SMOC (South Midlands Orienteering Club) had set up their own relay race between them and some other local orienteering clubs. In these pre-internet days we were unaware of the race, even when Ampthill and Flitwick Flyers became the first running club to get involved in 1991.

Despite the relay starting in Leighton, we didn’t get involved until 2004 when a solitary team made up of Tom May, Joe Hurley, Paul Dimmock and three Inchleys managed to be the first to finish out of the 11 teams that took part. Since then, the race has gradually increased in size up to a peak of 45 teams coming from running clubs across the area with many clubs entering multiple teams. 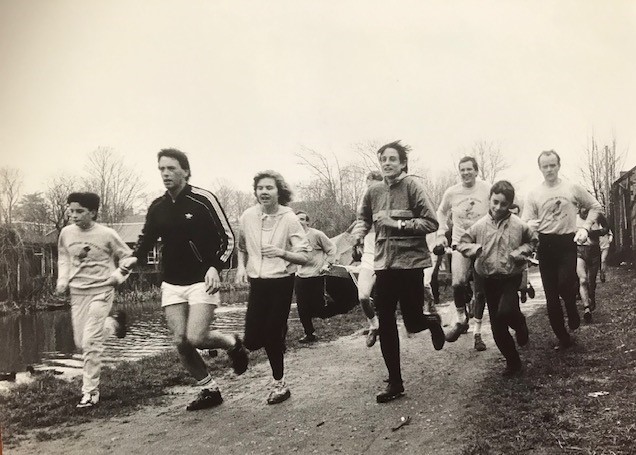 Towards the end of the original 1987 relay, with the actual last leg runners hidden in the middle of the pack. The centre three are Chris Bewick, Sally Mills and Mike Shevyn – no idea who the kids are on each side, getting in the way!

Now for this year’s race

The 2021 edition of the race was long awaited after two dates were set and passed in 2020, then the first date of this year was also bypassed as the national lockdown was extended. Eventually though, after many date changes, injuries, illnesses, recoveries and pings we somehow managed to have a record turnout of thirty-six people lining up to race across the “wilds” of Bedfordshire on a perfect August day.

One of the most pleasing things about our entry into this year’s race is that sixteen of the thirty-six runners from LBAC were making their debut in the event, with every team having at least one “newbie” in their ranks. It’s great to have members embracing different types of running, particularly after the last seventeen months.

Our six teams were made up of one ladies team, two mixed teams and three “open” teams, which all started between 11:55 and 12:35.  The target finish time to hit the handicap exactly is 5:00pm and the handicap is determined based on the age and gender of each runner.

There are six different trophies for the event, which are given out at the end:

This year we didn’t have anyone taking part in the solo race, although Stu Blofeld did decide to cover the distance on the day – just for the fun of it!! 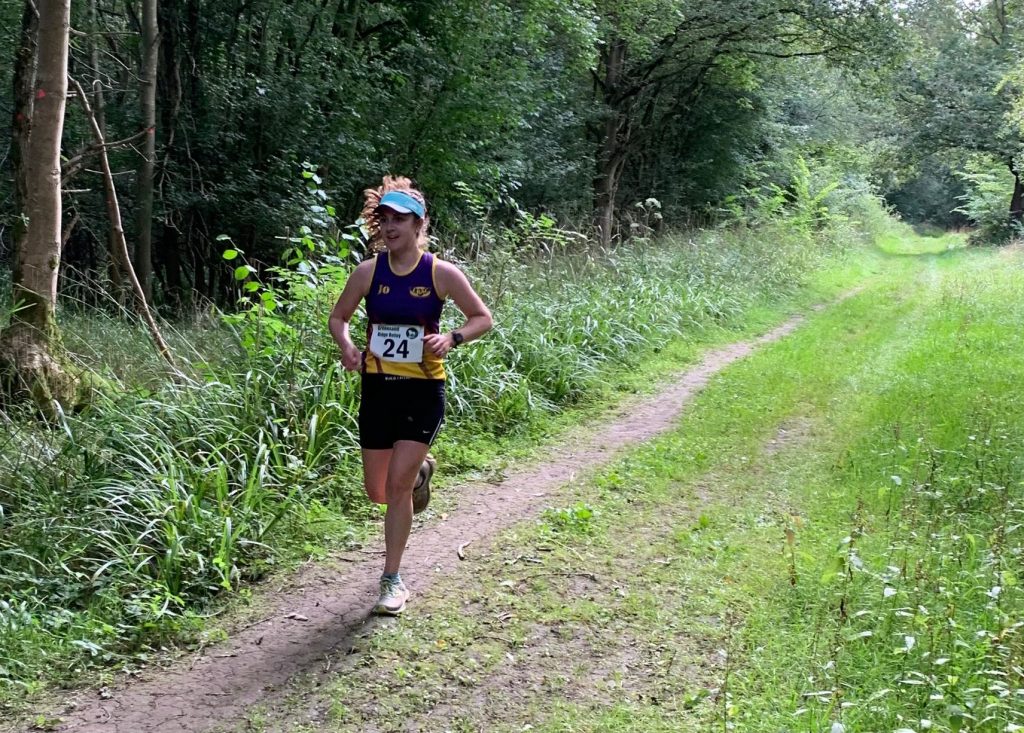 Jo Sharples, in the woods with half a mile to go

One of the unusual aspects about the event is that, with the exception of the Greensand Shield you don’t really know how you’re doing compared to the other teams until the results come out. Our ladies team were up against three other all-female teams, two from Tring and one from Dunstable. They completed the 34 mile route in 4:30:24 which would have been quick enough to win on most occasions. However, this year one of the Tring teams ran 4:28:19 to take the trophy by less than four seconds per mile!

Tring also managed to pip us into second place for the Greensand Shield. Despite being fifty-four minutes ahead of the handicap, our leading men’s team crossed the line second, seventeen minutes behind Tring Trojans. All of our runners smashed their handicaps, including Steve Buckle beating his by eighteen minutes on the long leg three. However, Lynda Hembury from Tring is an exceptional F65 and she beat her handicap by forty-four minutes, by covering nine miles cross country in 1:11:19! That makes a team very tricky to catch…..

Our first men’s team (Mine’s a Corona) did get to take home the fastest team trophy for the sixth time in nine years with a ten-minute win over Tring Romans, with all of the runners being in the top two on their respective legs. On top of that, all six of our teams were in the top fourteen places out of thirty-four for overall time, clearly we are a speedy bunch.

So that leaves the mixed teams. Remarkably, out of the thirteen teams in the category we managed to finish with the top two as “On Route to Barnard Castle” came out as the winners despite a minor “detour” from one of their number who was enjoying his so much, forgot where he had to go! 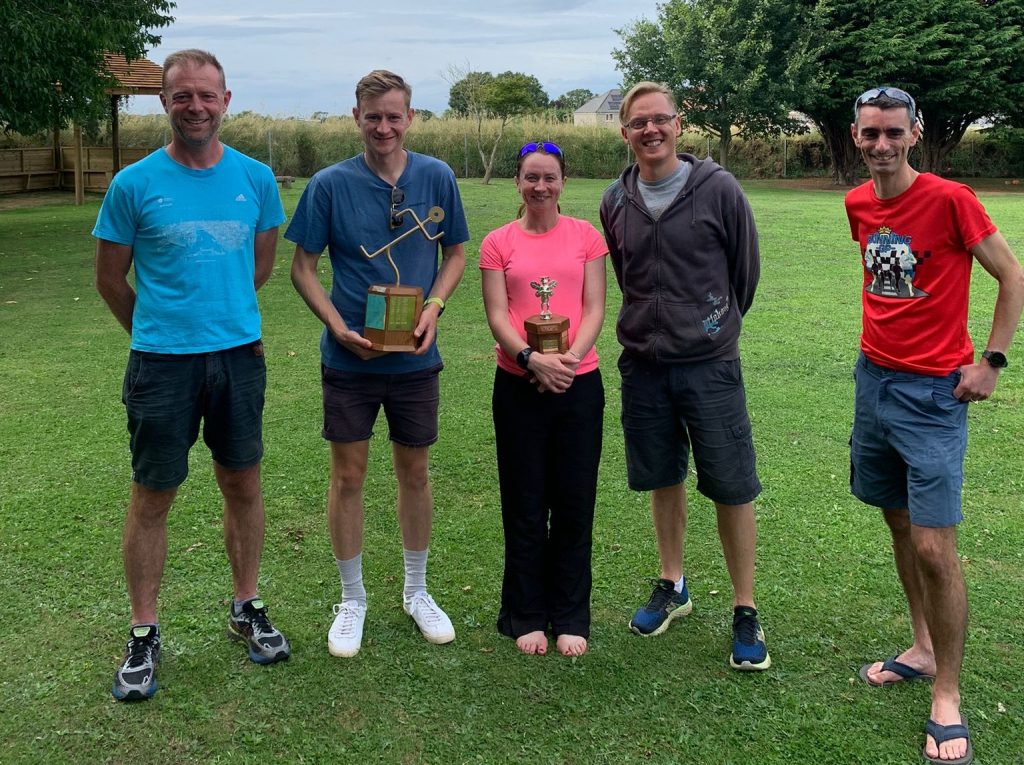 Four chaps from “Mine’s a Corona” and Amy as the “On Route to Barnard Castle” representative.

For those of you who like to properly study the results, there is a whole heap of data on the relay website, including a full archive, going back to 1988. www.smoc.info/GSRR/index.shtml

Thank you to all of you who took part in this year’s event as it’s a bit of a commitment, but hopefully you enjoyed it and will be back for more next year. The date isn’t confirmed, but will either be the 18th or 25th June (my money’s on the 18th). 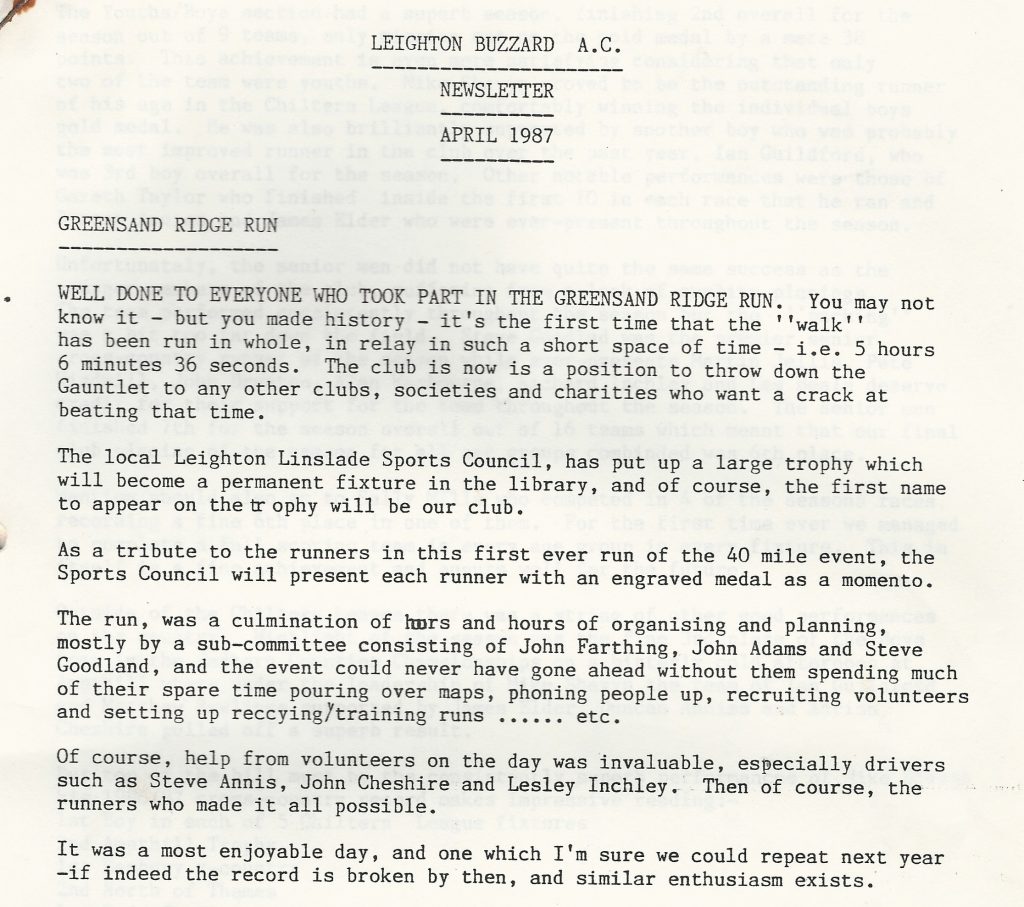 From the days pre Twitbook