With the trail running relay season well underway, Leighton Buzzard Athletic Club decided to take on a new challenge; the Ridgeway Relay, a tricky trail route between Ivinghoe Beacon and Marlborough.  So on a sunny, breezy Sunday morning the first runners from the Buzzard Trailblazers (a Mostly Female team) and the Leighton Greensanders (a Mostly Male team), joined 35 other teams to complete this arduous route. Rachel Fawcett and Michael Furness (running a cheeky 06.40 min mile pace) had the early start and the steep initial sprint down the beacon kicking off the race for both teams alongside a feverish WhatsApp conversation (share live location is definitely the way ahead in future relays). They both thoroughly appreciated having James and Ian at the start line waving them off (Ian clearly recognising that the best way to prepare for a 10 mile jaunt on the Ridgeway is with a bike ride up the Beacon).

The plan was to settle in and just enjoy the day of running, no serious thoughts about winning anything. After the Greensands Relay the week before, some of the runners were feeling a bit tired and apprehensive about taking on this pretty difficult route. However, it wasn’t long until Amy Farnfield and Charlie Mead had the metaphorical baton and were steaming away on their leg. After a few of the athletes had been through their changeover points, a different picture started to emerge; the competitive edge of all the runners had kicked in and both teams were putting in some impressive and very consistent timings, holding their ground and gradually gaining places. 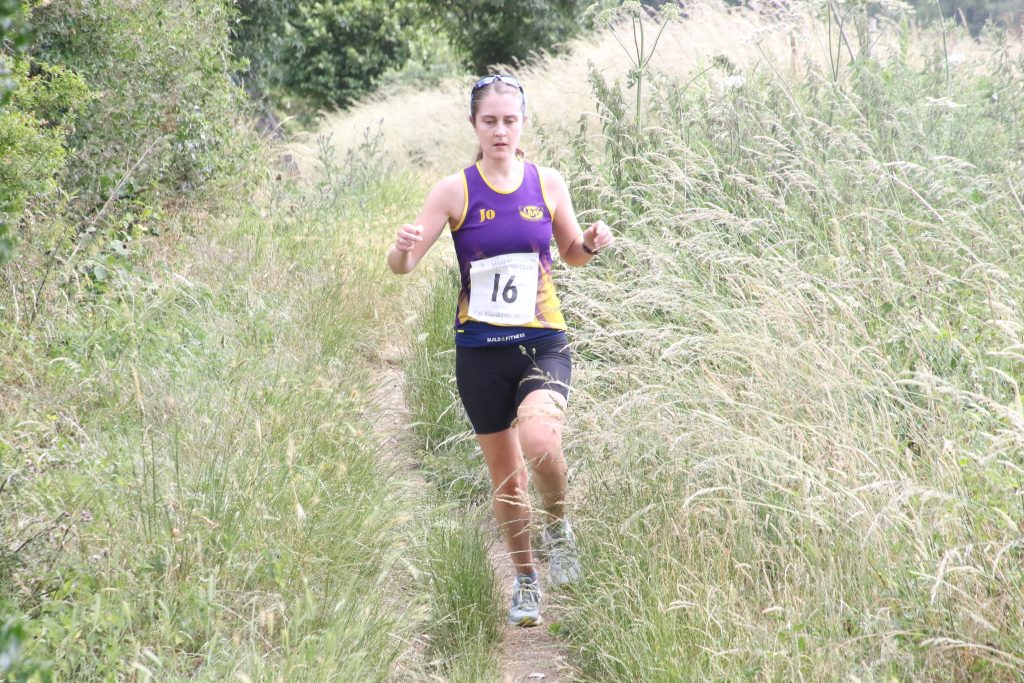 By leg 3, it was Coralie Anderson and Matt Styrka where were in charge, both putting in a sterling effort but with the Greensanders still ahead and now in 8th place overall.  Then it was the turn of Liz Peters, only recently back from injury and Andrea Meek both of whom had to deal with the midday sun and a rather unpleasant uphill finish.  As a demonstration of how well James had balanced the team, this leg saw the Trailblazers reduce the time between the two teams to three minutes before the batons were passed to Jo Sharples and Nick Clay.  What a race between the two teams as the closely fought leg ended with Jo, putting the Trailblazers ahead for the first time by 12 seconds. Next it was the turn of James Bell and Sam Dear (always going to be a competitive duo) with Sam setting the rapid pace of 06.52 (with a 351m elevation gain) allowing the Trailblazers to pull away further and into 11th place. 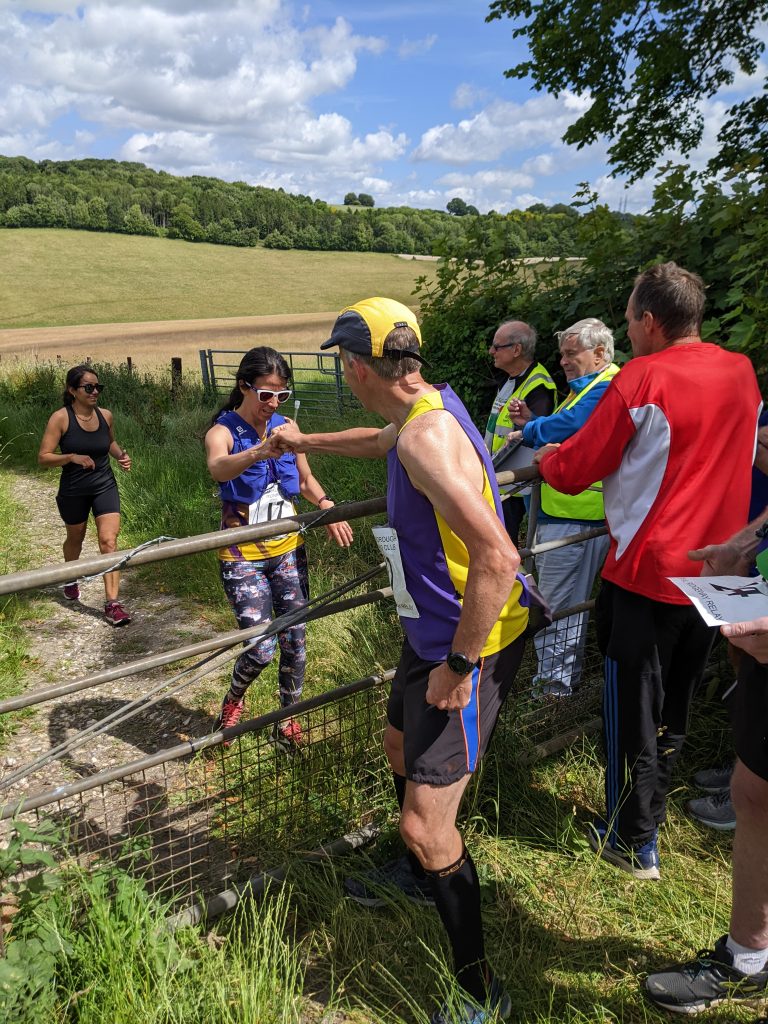 Andrea & Nick tag between legs 4 and 5

The teams swapped positions again with the first mass start of the day as Matthew Brooks improved the overall standing of the Greensanders to 11th place while Becky Geekie maintained a strong 13th overall.  From here it was up to Cam Geekie and Ruth Eastman to continue the fast pace, both easily maintaining the overall positions of both team on their leg.  Then onto Ian Grimshaw and Will Eastman who were never going to take any prisoners; Ian’s impressive pace of 06.44 saw the Trailblazers gain a place and move up into 12th overall. 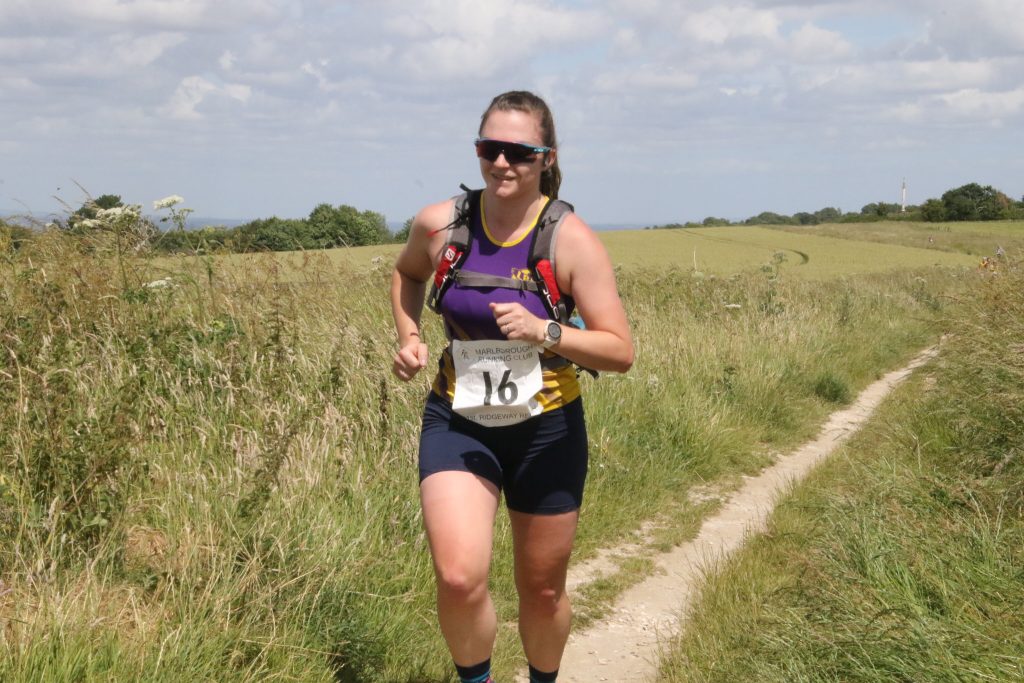 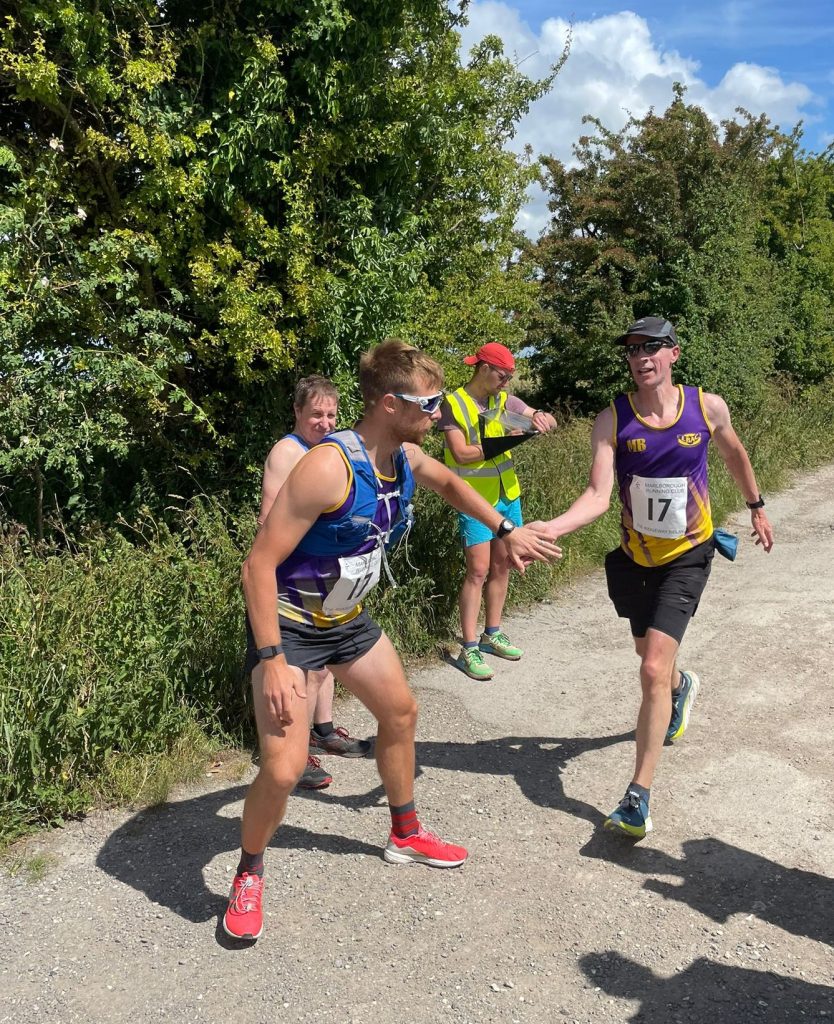 It was then down to Alison Bell and Ceana Mackenzie-Brodie to dig deep for the final leg.  By the time they crossed the finishing line after 86 miles of team work, there was a general feeling that the teams had done pretty well. When the timings came in, the Leighton Greensanders had completed the course in an impressive 11 hours 35 minutes and 40 seconds.  However, Buzzard Trailblazers had won the Mostly Female category in a superb time of 12 hours and 29 seconds. 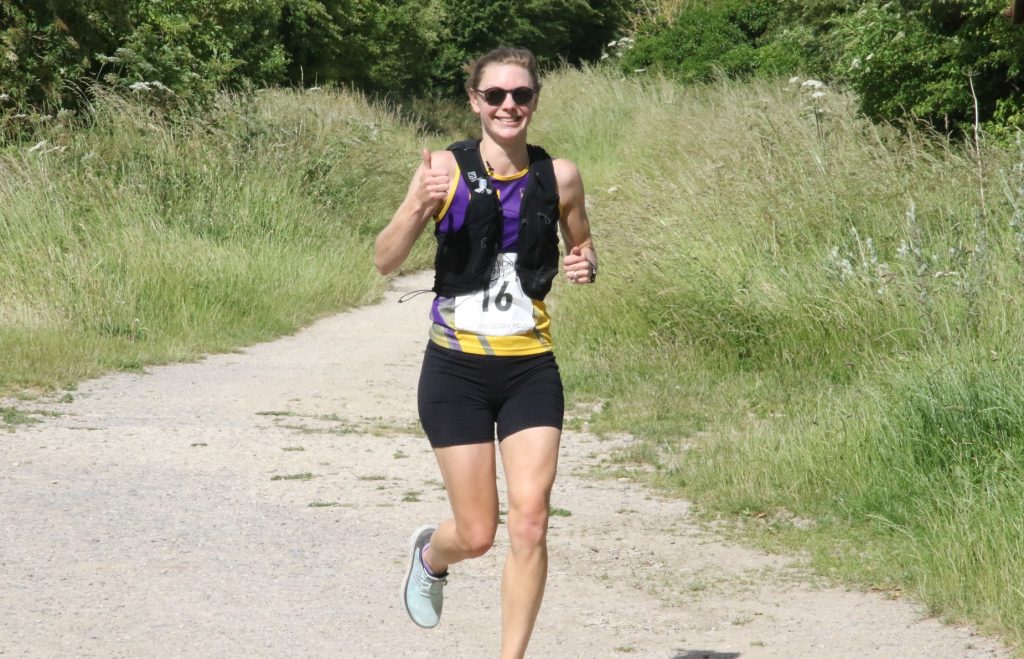 “Thumbs up if you’re having a good time!” – Ruth poses for the camera on leg 8 (Photo Credit: Barry Cornelius)

This race was testament to the grit, determination and general team spirit of the club.  Everyone running their hearts out, contributing to the excellent overall timings. Encouraging messages and photos were all being posted on WhatsApp throughout the day, keeping everyone up to date and motivated.  There are certainly some good stories to come out at the next club dinner, that’s for sure. 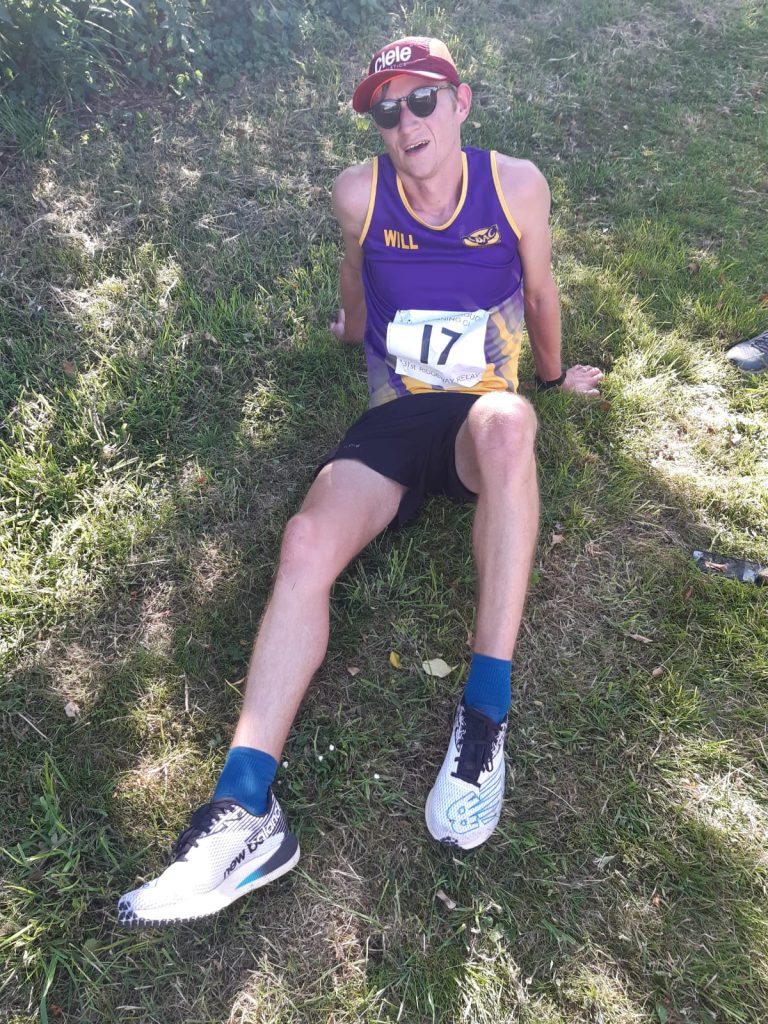 Will takes a moment at the end of Leg 9 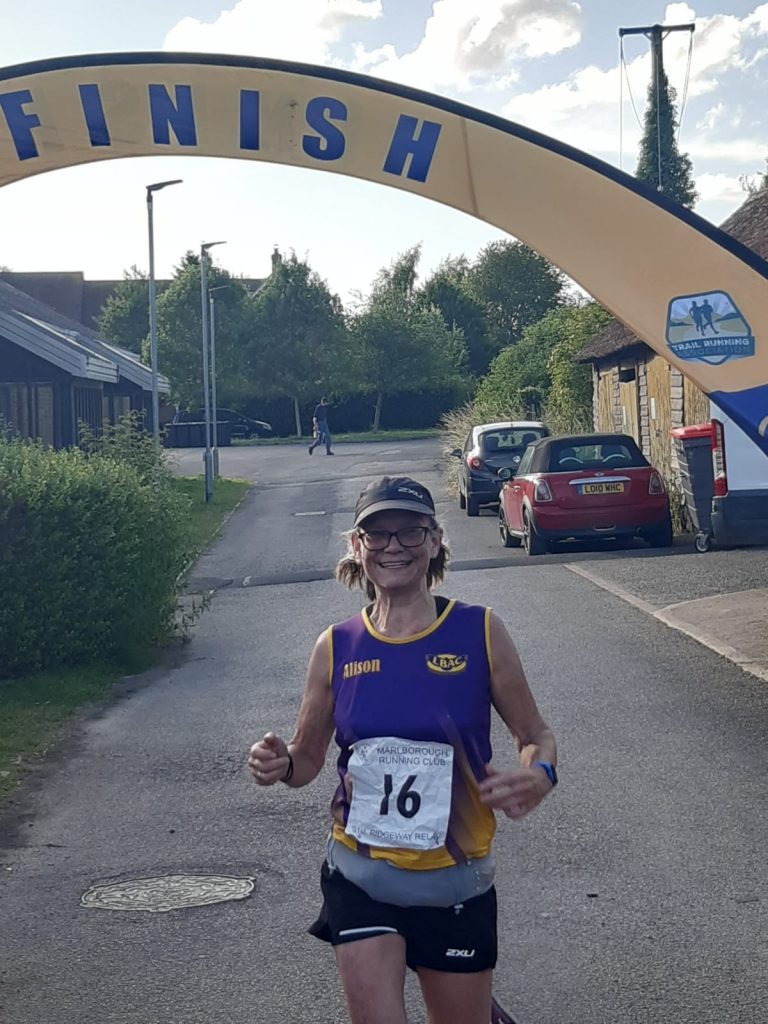 Once again the athletes donned their club vests and dug deep but none of it would have been possible without the organisation of James Bell and Ian Grimshaw, the general car sharing, group recc’ing and encouraging WhatsApp group.  What a great race and great team effort.

Full details can be found at this link, with a natty graph at the end showing what each team did.